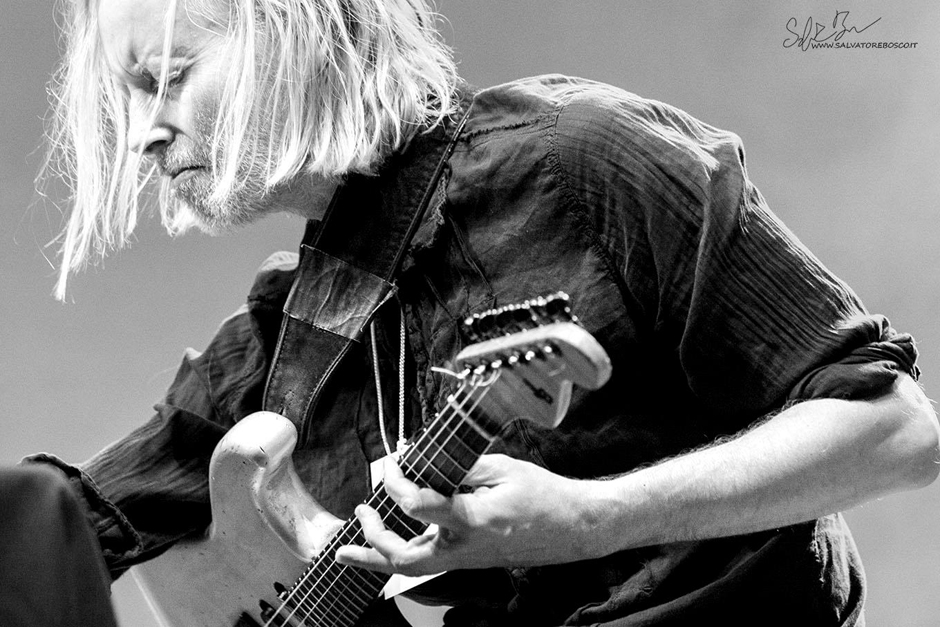 Eivind Aarset is a guitarist with a unique musical vision that absorbs and reflects all manner of music while retaining an enviable individualism and high quality craftsmanship that can span from quiet intimacy to searing intensity. His debut as a bandleader on Jazzland Recordings was described by the New York Times as "One of the best post-Miles electric jazz albums," setting a high benchmark that Aarset has consistently met and exceeded, both in the studio and in live performance.

Aarset's musical awakening happened when, at the age of 12, he heard Jimi Hendrix. "I started on the guitar as soon as I heard him," he recalls with a smile. "I bought a second hand Hendrix record and that was it. Then I started getting into rock bands like Deep Purple, Black Sabbath, Santana and Pink Floyd before my brother introduced me to the music of Miles Davis, the Mahavishnu Orchestra, Weather Report and Return to Forever. After a while, I got into the ECM sound of Jan Garbarek, and Terje Rypdal, who was a big influence. Then I went on the road with a fulltime heavy metal band, a fantastic experience, until I got tired of being angry every night! Then I quit and became a session musician."

As part of the band, Ab & Zu, he created the unique guitar style and sound he would later develop further as part of saxophonist Bendik Hofseth's group. However, it was his involvement with Bugge Wesseltoft and the Oslo Jazz underground that crystallized the sound he was seeking: "What drew me to this music was the hypnotic grooves and musical freedom I found," says Eivind. "There's no established rules or tradition in what I am doing, you can make the rules up as you go along. Rhythm is the centre of the music, the landscape the soloist travels through. It's fresh territory and I have no idea where this scene will end up, but there's a lot of great sounds and new music being created which makes it such an exciting scene."

In 1998, Aarset released "Electronique Noire", his debut as a bandleader, and among the first Jazzland releases. Critics cast about for description that fitted the album: "Post rock"; "Nu Jazz"; "Post Miles Ambient"; and "Drum 'n' Bass Fusion" are among the many efforts, yet none truly captures the unlikely match of diversity and coherence that the album displays. During this time, Aarset was working and touring with Nils Petter Molvær, recording on the trumpeter's landmark album "Khmer" (and each Molvaer album since). As Molvær broke through, gaining an international listenership, many fans found their way to "Electronique Noire" and the initial, mind-bending impact of the album opener, "Dark Moisture," is still a popular topic of discussion among Aarset fans.

The next album, "Light Extracts," had much to live up to, and did not disappoint. Again, ambience and club rhythms were present, but the music was becoming a truly separate organism. Where "Electronique Noire" has tracks that could be individually described in terms of genre(s), "Light Extracts" offered music that could only be described in terms of "Aarset-ness". The album features the bass clarinet of Hans Ulrik, an artist Aarset met when recording with Marilyn Mazur's Future Song; Ulrik's sound would lend the album a whole new dimension, and he has appeared on each release since. Aarset retains melodic elements, and uses sound as poetry or painting, somehow anchoring it in definite imagery rather than the abstract. Of course, many critics visualise a wintering far-northern Nordic landscape, complete with fjords and whalesong; however, the soundscapes could equally represent deserts, jungles or even desolate alien mountains. The music speaks to a universal spirit.

"Connected" marked yet another leap up on Aarset's evolutionary ladder and sits like a prelude to a manifesto. "Connected" perfectly captures Aarset's working method. His musical world is uniquely his, and the vocabulary of his guitar describes it as no one else could. The music has become self-referential, yet manages to retain warmth and openness. The overtly club music aspects of the sound have been fully consumed, and are accompanied by a new glitchiness, courtesy of Jan Bang, Erik Honoré and Raymond Pellicer. Aarset's reflexivity progresses boldly, offering "Changing Waltz", a variation and re-visioning of "Empathic Guitar" from "Light Extracts". Unburdened by the history of electric guitar and guitarists, Aarset erases any of the potential egoism of being a guitarist with a Zen-like calm in favour of stronger musical statements. In addition to Hans Ulrik's clarinet comes Dhafer Youssef's oud and voice, bringing the electronic and the acoustic to a new equilibrium rarely achieved.

Aarset also has appeared on the album "Jazzland Community", a document of the 2006/ 07 tour featuring Bugge Wesseltoft, Sidsel Endresen, Håkon Kornstad, Marius Reksjø¸ and Wetle Holte. Two Aarset tracks appear, "Connectic" and "Electromagnetic", and two ensemble pieces: "The tour was a great experience for me," says Aarset. "I loved the way our different styles and concepts worked together and came out as a whole unified concert, not just different acts in one show. And the collective improvisation at the end of each concert was amazing. It was always happening." "Sonic Codex", Aarset's forth Jazzland release, is perhaps the strongest studio album with a band he has produced so far. "Sonic Codex" takes concepts from his earlier albums, restates, elaborates, and then amplifies them to create a true masterwork that may well be a defining moment in both Aarset's career and the history of Jazzland. The album's title is a perfect summary of its hour-long contents: it is a SONIC CODEX. It puts forward Aarset's rules of engagement with the listener, and very deliberately quotes and redefines the musicality that made up his previous three albums, "Electronique Noire", "Light Extracts", and "Connected", yet also points his way forward; it is an innovative present that simultaneously summarises the past, and predicts the future.

Taken from various venues, and with slight variations of personnel, Live Extracts retains the unity of feeling and purpose found on Aarset's studio work, yet is constructed from a completely different perspective. The dynamism of the live sets offers the listener a fresh perspective on familiar material, often sounding completely reimagined. However, the distinctive approach is clearly that of Eivind Aarset, albeit less distilled or refined: this is the raw ore of his imagination, often bold, energetic, and untamed, yet capable of moments of stillness, tenderness and cool composure. It is an expressionistic version of his sonic world, but never falls into self-indulgence - ego takes a distant backseat, instead allowing the interplay of the musicians to grow both inside and out the song structures that Aarset's fanbase know so well, creating something utterly new in the process. The opening and closing tracks, although growing to and from separate established pieces from the Aarset oeuvre, are superb examples of spontaneous music, filled with atmosphere and delicate brilliance. Echoes of Jimi Hendrix and Miles Davis also resound in Electromagnetic and Sign of Seven respectively, but are driven through a very Aarset filter. For fans, this will be an affirmation of their zeal for his music. And for those who have never experienced Eivind Aarset's live performances, Live Extracts will be a revelation, one that will make them pay very close attention to concert listings in future.

Although "Dream Logic", Eivind Aarset’s fifth studio album seems to mark a departure in many ways (his first album as leader outside Jazzland Recordings, and no "band" in any conventional sense), the identity is unmistakable. Working closely with Jan Bang – who co-wrote several of the tracks – "Dream Logic" like its predecessaor, "Sonic Codex" lives up to its title, with motifs and musical "images" merging and emerging from guitar-based soundscapes. At one fluid and dynamic, the effects can be hypnotic or disconcerting by turns, yet the feeling throughout is that one is listening to an artist at the peak of his powers. The working relationship with Jan Bang has been one that has made some important contributions to Aarset’s previous albums (notably "Family Pictures", a 3-part piece spanning two albums), but here that relationship has created something familiar and strange, and perhaps represents Aarset’s most ambitious project to date, not in the scale of the production, but in the capable and determined exploration of hitherto barely explored regions of his sonic world. The results are, invariably, beautiful. Where Aarset will go from here is anyone’s guess, but what is certain is that the journey will be worth taking.